King Of The Cage:  Maximum Speed

Results can be found at:

As the old adage goes, with every cloud comes a silver lining.
About two weeks ago, when local Professional mixed martial art’s fighter “The Captain” Morgan Sickinger found out that his scheduled fight in Sheboygan had been cancelled, he wasn’t exactly sure what that silver lining was.

Sickinger had been dedicated to training for nearly three months and all would be for not if other arrangements could not be made.

But it didn’t take long for Sickinger’s prospects to begin to looking up. After a bit of searching, Sickinger and his opponent found a new venue for their bout: The American Predator Fighting Championships 12, an event being hosted right in Sickinger’s hometown of Manitowoc. Sickinger will take on Eugene “The Crippler” Crisler in a Professional Catchweight match, one of 13 total fights on the card Saturday night at the Manitowoc County Ice Center and the lone Professional fight scheduled. It may not be the first time Sickinger has had the chance to fight in his backyard, but he has come a long way since the last time he appeared in Manitowoc.

The event, which gets under way at 7p.m., marks the first time American Predator Fighting Championships has put on an event in the state of Wisconsin. Paul Metz, one of the event’s organizers and owner of Metz’s Martial Art Academy in Manitowoc, knows that MMA has a respectable following in the area, but he hopes the event will provide an opportunity to introduce people to the sport.

“There are a lot of misconceptions out there. This is definitely an all-ages family event,” Metz said. “Most people don’t understand that it is a regulated sport through the state.”

Each fighter must be licensed to fight. The process requires an extensive amount of paperwork and medical clearance – everything from routine physical to blood work.  Formalities aside, the amount of training that goes in to each fight, whether at the amateur or professional level, is mind-boggling.

“People don’t realize these guys are professionals. They train like professional athletes,” Metz said. “They don’t have an offseason. They’re in the gym four, five days a week.”

Sickinger echoed Metz’s sentiments.  “You’re going to see a lot of talent. The training that goes into each match is incredible,” Sickinger said. “I know all of the dedication that even the amateurs have to be putting in hours upon hours if they want to be in the cage.”

The evening’s main event features Jeff Behnke and Bobby Bernicky in an Amateur Middleweight Title Fight. Behnke currently holds a pair of amateur titles from North American Fighting Championships, one at 185pounds, the other at 205.

Advance tickets can be purchased at Metz’s Martial Art’s Academy, Saucy’s Sports Bar and GNC in Manitowoc. Ticket price ranges from $20 for general admission standing tickets to $50 for a front row, VIP table. Tickets will be sold the day of the event, but prices increase $5 at the door.
“It’s a great night and event,” Metz said. “You’re looking at three to hour hours of entertainment.”  Doors will open at 5:30p.m. on Saturday.

After Three Rounds of War

In the first round, the two fighters met in the middle of the cage where they began right away exchanging leather. Straights started flying at one another, & then along came knees as both warriors were in the clinch delivering them. After a kick by Sickinger to the ribs, Pacheco caught the kick and drove into his opponent earning the first takedown of the fight. While on top of the grounded Morgan Sickinger, Pacheco attempted a submission which was unsuccessful. The fighters both rose back to their feet. The striking began again until Sickinger takes down Pacheco. The takedown didn’t last long as it turned into a scramble and they were back on their feet.

The second round was much like the first round as each wrestler earned takedowns & continued to exchange strikes with each other. Sickinger looked more active than he has in his past fights & was continually moving & attacking inside the cage. He was able to put together several combinations that landed on Pacheco.

Pacheco also displayed fast hands as he delivered his own combinations on the face of Morgan Sickinger. In the final round the two fighters showcased their hearts as they went all out against each other. Sickinger continued looking for takedowns as Pacheco stuffed them throughout the third round. Both fighters looked sharp & displayed a battle for the fans that had them guessing who won.

The judge’s score cards came in giving Jose Pacheco a Unanimous Decision over Morgan Sickinger by a score of 30-27, 29-28, & 29-28. The bout was a tough one to score which could have went either way for the fighters. Leaving it to the judges to decide & not finish left Morgan Sickinger empty handed & walking home with a slash in the loss column.

Sharkbite MMA and Fight For a Cause teamed up to co-promote the first installment of Bill Finn’s Sharkbite Fighting Championships last night at the Final Approach in Sheboygan Falls, WI.  The evening provided a dozen bouts, as well as raising money for the Vets Journey Home charity to aid veterans in the transition to civilian life.

The evening’s main event featured a contest for the promotion’s inaugural lightweight championship between Unified Martial Arts representative Morgan Sickinger and Sharkbite MMA head Bill Finn.  Having split a pair of bouts under different rulesets, the two set out to resolve their trilogy and crown the promotion’s first champion.  Finn began strong, sprawling on an early shot from “The Captain” and latching on a guillotine choke.  Sickinger escaped the hold and was met with a hard knee for his efforts; however, Sickinger was relentless in his pursuit of the takedown, eventually dragging “The Shark” to the mat and quickly transitioning to back control and locking up the fight-ending rear naked choke.

This will the be a “True Rubber Match” having already meet prior to this in a Kick Boxing  & Submission Grappling match.  This Final time is a MMA Fight.

The Magic of Regional MMA: A Night at Madtown Throwdown

And then there were those things you really only see at a local show to make it even more valuable.  Like the guy who would always cheer for the local fighter, but never bothered to learn any of their names, instead preferring to just yell out the city where the fighter was from.  Or the eight-person, all-female cheering section that went absolutely nuts for Morgan Sickinger, who won his fight over Matt Wikoff by submission.

In the first professional bout of the evening Matt Wikoff of Central Illinois Combat Club took on Morgan Sickinger from Unified Martial Arts.  Both fighters come out felling each other out before Wikoff gets a takedown.  They scramble for a while on the ground but eventually Sickinger gets out & up.

Back to their feet Sickinger lands a big kick to the body of Wikoff.  Wikoff drops Sickinger with a left & lands a knee to the body.  Sickinger is up & manages to get a takedown as they scramble & Sickinger locks up an arm bar as Wikoff screams out in pain but is saved by the horn.

Early in the second Sickinger gets Wikoff against the cage & lands some knees.  Wikoff gets the fight to the ground & gets Sickingers back & looks to sync in a rear naked choke but the slippery Sickinger gets free & moves to Wikoff’s guard landing some ground & pound & elbows before getting full mount.

Sickinger goes for the arm bar again but Wikoff slips free & lands a few punches on the ground before the horn. In the third Sickinger looks to get a single leg takedown & eventually gets it.  Sickinger lands some punches to the head & body of Wikoff before working to Wikoff’s back & sinks in a rear naked choke that forces Wikoff to tap.

Both Matt “Kid Lightning” Veal needed a victory to get back on track.

He got just what he needed over the weekend.

Veal made quick work of Wisconsin standout “Captain” Morgan Sickinger and Neumann had no trouble with Ben Miller during Saturday’s Driller/SEG show at the High Five Sports Bar and Grill in Burnsville. 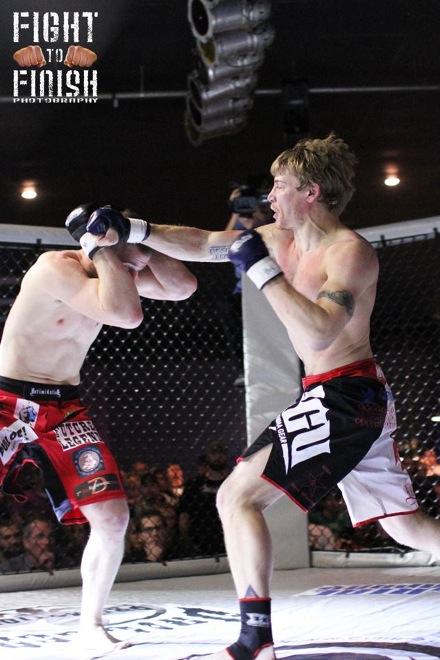 Veal was coming off a loss in Bellator last May, though he’s had a great deal of success here in Minnesota. The native Canadian is ranked No. 3 in Minnesota at 145 pounds, thanks mostly to a pair of wins over the Blumer brothers, Melvin and Marvin.

Veal and Sickinger came out swinging Saturday, but neither fighter was able to land a power punch early.

Veal attempted a few early takedowns, but Sickinger stuffed each attempts. After one of the stuffed attempts, Veal pulled guard and threw on a guillotine choke.

Sickinger didn’t appear to be in trouble, but then Veal adjusted the choke. And seconds later, Sickinger was tapping out, giving Veal the submission win just 2:23 into the opening round.

It sure wasn’t pretty but the end result was a win for Unified Martial Arts’ Morgan Sickinger. “The Captain” may not have stolen the show with his Split Decision Victory Score of (29-28, 29-28, 27-30) over Josh Kasee but it did get him back in the win column.

Rd2- Sickinger attacks off the whistle again and lands a straight to the face & grabs a leg of Kasee. Kasee gains top side control Sickinger. Kasee earns back control until Morgan Sickinger stands up & escapes. Sickinger is on the legs of Kasee against the fence. Both fighters are at a stalemate on the fence. Sickinger lifts Kasee over his head like an All-American in wrestling & slams him to the mat. Kasee stands up and just misses the face of Sickinger with a strong right. Sickinger pins Kasee against the fence again. Sickinger starts throwing punches to the body of Kasee as Kasee is delivering elbows to the body of Sickinger in defense. Sickinger finally earns a takedown as the round expired.

In the main event of the evening, Ohioan Jon “The Beast” Washington pitted his 4-2 record against Wisconsin’s “Captain” Morgan Sickinger in a back & forth grappling match that saw each fighter take the other’s back in the first round. Washington was able to nullify a point taken by referee Victor Ventresca for an apparent blow to the back of the head by sinking in a guillotine choke for the submission early in round two. Washington moves to 5-2 while Sickinger falls to 9-6.Winner: Washington, Submission (guillotine) at 1:47 of Rd 2.

Fight was cancelled due to Pennsylvania’s Athletic Commission

Sickinger Returns to His Winning Ways

The night’s main event pitted “Captain” Morgan Sickinger against HIT Center’s Derek Griffin.  Both men came out firing, looking to start off the new year with a win and erase the memory of the tough year they both had in 2011.

After about a minute of trading knees from the clinch and jockeying for position against the cage, Sickinger seized his opponents back after a quick scramble and secured the rear naked choke shortly after, awarding the Unified Martial Arts representative his first win of 2012 in just under ninety seconds.

The fights have wrapped up over in Sheboygan. Check out all of the quick results from the Sheboygan Showdown IV card that saw “Captain” Morgan Sickinger get back into the win column with a first round submission over Derek Griffin.

Coming into his Sheboygan Showdown IV matchup against Derek Griffin on Saturday night Morgan Sickinger needed a victory in a big way. “Captain” found his way into the win column with a first round rear naked choke.

Putting an end to his five-fight non-winning streak, Sickinger improved his record to 9-5 and earned his seventh victory via submission. Watch the entire video from the fight right here on US Combat Sports.

This entry was posted in Notifications. Bookmark the permalink.